Not Quite A Victory 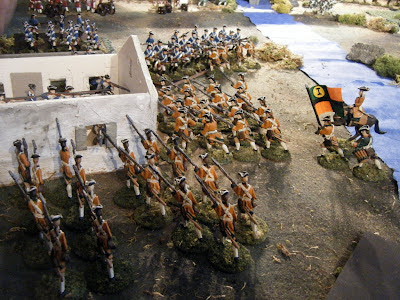 ...in fact, rather clearly a defeat.

To back up a step or two--it's been a busy couple of weeks since my last post (still getting settled into my new job and such; haven't had much time to paint) but this weekend I made the trek back up to my old stomping-grounds to take part in a Not Quite the Seven Years' War game Dad was putting on at another club member's place.

Dad's take on the game can be found on his blog here, but I figured I'd offer my own perspective, along with the customary selection of pictures. The scenario involved the capture of a bridge placed roughly in the center of the table--as it happens, it's one of the same ones Dad ran at Historicon a few weeks ago in which I ended up helping referee, and one which we did at Barrage a couple of years back.

For whatever reason, the Wachovians have ended up in the same position all three times--entering from one table edge and advancing along the river bank. While terrain naturally changes a bit from game to game, one of the key features on this side of the board is always a cluster of buildings or walled farmhouse across the river from the entry point and about halfway between the entry point and the bridge. For some reason, I have an inflated notion of the value of occupying buildings in Charge! and so my plan for the battle involved crossing the river and seizing the farm compound while seeing how things developed in the center.

Unfortunately, today's running of the scenario involved my allies in the center arriving on the third turn, which is a twist I had not recalled from previous play-throughs. In any case, the opposition had plenty of time to occupy the center of the board, including the bridge, while my allies had to fight their way on from the edge of the board. A couple of lost melees kept them pinned in place while trying to rally; my cavalry, while somewhat more effective, were basically unable to affect the outcome in the center. (Is seems that in the postgame, while I was out on a pizza-foraging mission, I got tagged as the scapegoat--apparently I should have brought my cavalry on first. How I was supposed to know this when choosing my march order at the beginning, I'm not sure--especially since I was not aware of the delays in the center when writing my orders.)

Not that my part of the battle went much better--the river-crossing part of my plan was a disaster, and one company basically vanished under short range musket fire just as it reached the far bank. This put my regiment pretty close to breaking, and while we successfully stormed the buildings on only our second try, we were quickly reduced below half strength from more volley fire. Note to self: houses are basically deathtraps in Charge!

The cavalry under my command acquitted themselves somewhat better (though the hussars still got mauled) but it wasn't really enough to turn the tide. All in all, while it's always nice to see the figures on the table, I found this game to be kind of disappointing, since between poor deployment and poor die-rolling we were in trouble from about turn 2 onwards. Between this mess, the loss of Adelheim fortress at Historicon 2011, and the abortive invasion of Stanzbach-Anwatsch at Historicon 2012, the Wachovian Prince-Palatine is starting to wonder whether it might not be time to make a separate peace with the Northern Alliance... 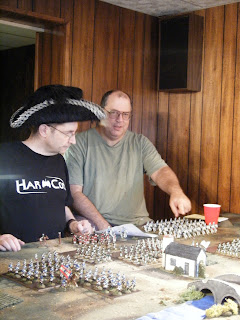 The Northern Alliance plots strategy. It's been speculated that Chris Palmer's magnificent hat was key to their eventual victory. 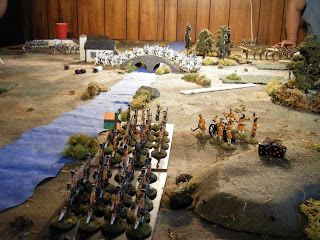 Wachovian infantry enters the table even as the enemy cavalry crosses the bridge. 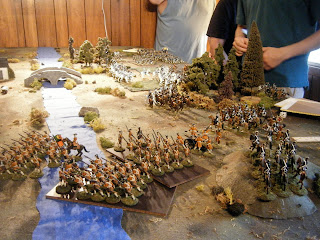 Cavalry melee ensues on my right as I begin fording the river. 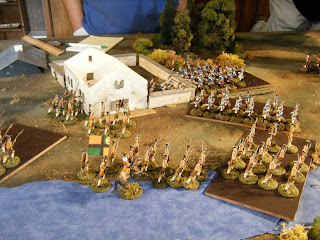 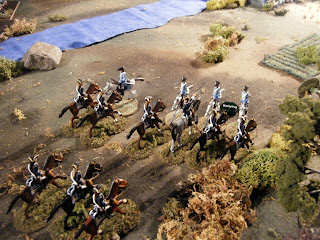 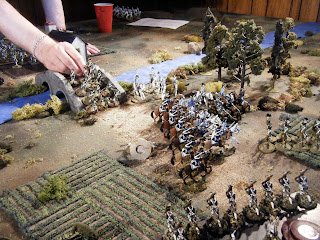 More S-B dragoons attempt to pull our chestnuts out of the fire--to no avail. 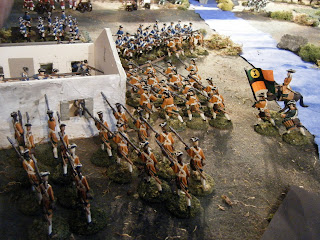 The assault on the Fatal Farmhouse. 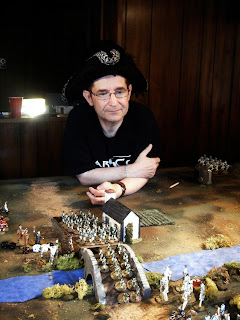