Well, the Byzantines have finally seen their first action. My brother and I were at home this weekend to help with Dad's ongoing move, but between bouts of schlepping boxes around, we found time for a couple of games of Hordes of the Things, featuring my new Byzantines with a couple of filler units vs. his Arabian Nights Arab/Almoravid army. Actually, both sides are in an incomplete state, as William is still lacking a good portion of his cavalry. Between that and the wizards, the two sides were pretty far from historical. The armies were as follows:

MIZARENE EMPIRE:
3 Knights (including the general)
2 Riders
3 Spears
1 Shooter
1 Flyer (a pair of angels from among my miscellaneous things)
1 Magician (Blandalf the Blue, another fill-in)

Game 1: I put my cavalry in the lead, with my Knight General front and center. He sent out his shooters. The knights thundered forward, the archers let fly, and my general pulled a Harold Godwinson. Oops. On to game 2... 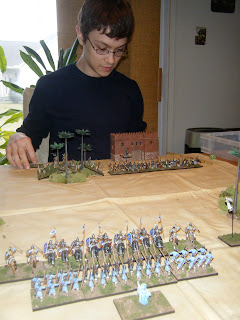 Game 1. His archers are lurking in the shrubbery off to the left.

Game 2: This time, in an attempt to learn from my mistake, I formed the knights and spears up in a single block, hoping that the spears would keep the knights shielded from any pesky shooters until I got in charge range of his spears. My light cavalry were deployed off to the right in hopes of eventually getting around and causing mischief with his main line. 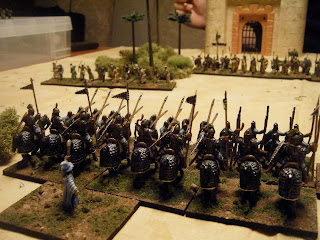 Unfortunately, he deployed his three groups of archers on my left, where they managed to destroy first my leftmost spears, then the knights behind them, before the lines closed. Down two units, things weren't looking great for the Mizarenes. I sent in my flyers and magician to distract his archers, then charged his line. And this is where at least a little of my original plan was successful, as my knights in the center charged through and destroyed a unit of spears, creating a gap in his ranks. 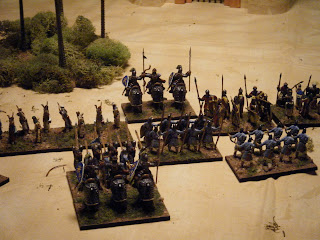 From there, I was able to take advantage of the confusion (and some poor command rolls on his part) to start rolling up his line, with my wizard and flyer taking care of the archers on the left. Meanwhile, over on the right, his riders and my riders remained stuck in an inconclusive scuffle: 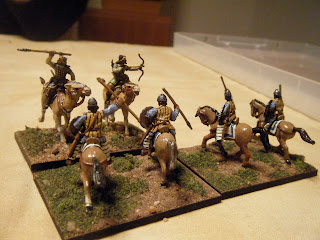 This went on all game.

He managed to get some sort of line patched together in the center, but despite a couple of setbacks for me (and a brief threat to my general from his flyer) I managed to destroy the requisite six units required to drive his army from the field. 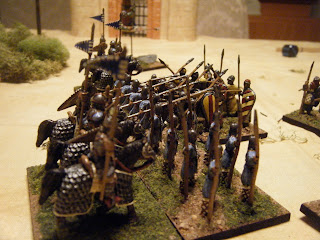 Spanish mercenary spears trying to hold off the attack.

I guess it's time to paint some more!
Posted by Norman Dean at 9:13 AM