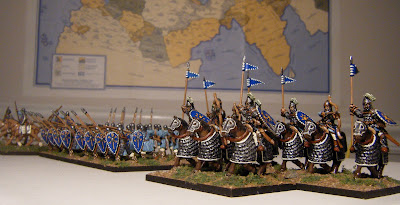 Yes, I have been painting more Byzantines. What about the Bronze Age, you ask? Don't I have a convention game coming up in just a couple of weeks? Indeed--but for once I think I have all the troops  I'll need for that, so I won't have to be painting up until the last minute this time. (Though there are a couple of things I might add if I should happen to get to them before March 8.)

Anyhow, here's the latest from the Golden Horn: 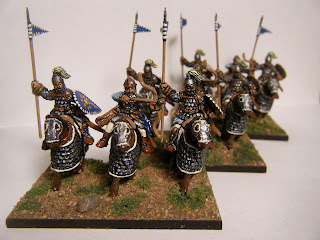 More heavy cavalry. These ones have beards--I'm debating whether I should go back in and paint beards on the earlier ones too, but is anyone really going to notice? Probably not. These are the last of the heavies, at least for now--at some point I plan on doing a cavalry/knight general, but that will use some of the other figures from the Strelets set. 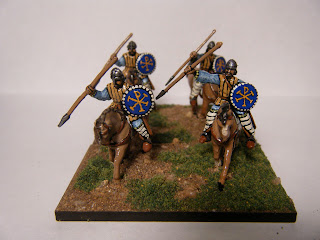 Also more light cavalry. There will be at least one more stand of these guys at some point. Also, though you can't really see it from this angle, since the relevant bits are on the back side, I trimmed off more of the baggy pants from these guys. The guy on the right got his sleeve trimmed a little too. 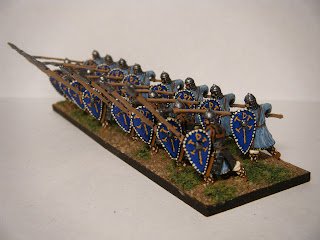 And finally, more spearmen, using a couple of the other poses from the Orion Byzantine Infantry (10th-13th centuries) set. Here's a closer look at them from the front: 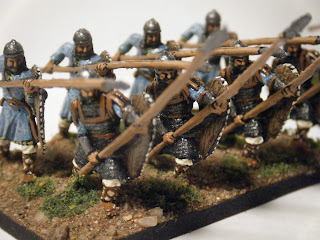 Arranging the poses in two ranks ended up being a little awkward due to the poses involved, but the armored guys bracing their spears against the ground made more sense to me as a front rank, with the guys in the second rank sort of lunging over them. Still, it's a good thing they're all wearing helmets, because it looks to me like someone's going to get conked in the head sooner or later... 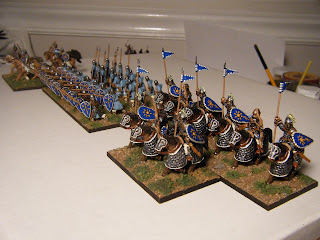 And there's the army as it stands now: nine units down, three to go! (Plus maybe a few extra bits here and there--I like my Hordes armies to have some flexibility...)
Posted by Norman Dean at 6:39 PM