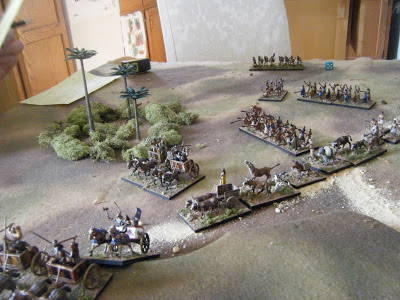 I've had some vague ideas for a set of rules rattling around in my head for sometime, but with Cold Wars only about a month away and me signed up to run a game with said "home rules," I decided that I had better actually try putting a few of my notions into practice.

Fortunately Dad was happy to oblige, and since I happened to have both a supply train and an appropriate fortress gate handy, we decided to use the "Convoy" scenario as the testbed for the rules. Based on the forces we had available, I set the Hittites to escorting the supplies to the fort, while various Egyptian units attempted to catch/intercept them. (Since the arrival times and placements for the intercepting player's units are random, there's a lot of variation in how this scenario plays out--sometimes the convoy has to fight its way through; sometimes it just has to outrun the enemy...) 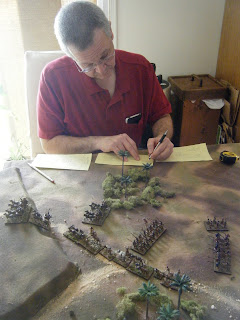 Chariots in the lead, the convoy and escorts head down the road.

The basic mechanic of the game is that each unit has a short list of different actions (moves & attacks) that it can perform. Some of them are free, but some of them deplete its pool of "action points," which also serves as the unit's health or hit points. I was reasonably pleased with how this mechanic played out, though there's a good bit of tweaking to be done when it comes to numbers--move distances, action costs, and the size of the unit's action reserves.

As it happened, most of the Egyptians ended up deployed behind the convoy, and with a somewhat narrow table, there wasn't a great deal of room to maneuver around, so I was able to throw my infantry units out one by one as "speed bumps" while I brought my chariots back from the head of the column to the rear. Fortunately the scenario also includes a cavalry (or in this case, chariotry) relief force to sally out of the fortress once the convoy gets close enough--my infantry's action reserves were small enough that they were breaking pretty quickly, particularly under the superior missile fire of the Egyptians. 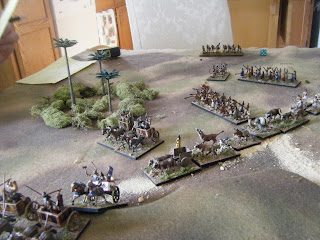 Some Egyptian archers turn up on the board edge. 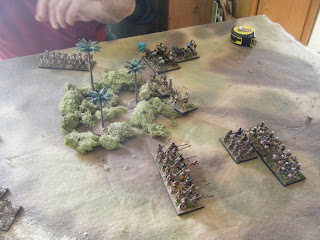 Hmm, now there's a whole bunch of them... 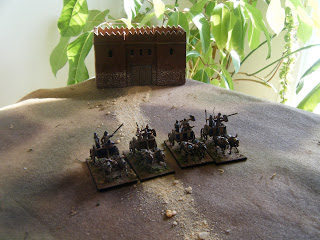 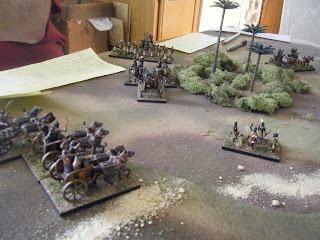 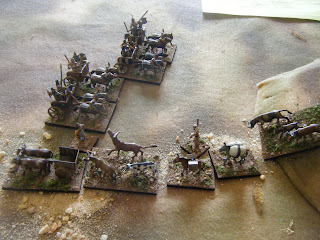 The convoy is safe.

In the end, I was able to delay long enough that the convoy made it safely to the fortress walls. The game played fairly quickly (we went through about twenty turns in about an hour and a half) and I was mostly satisfied with how the basic rules worked. There were some elements that we didn't get to test (no really wacky melee situations, for example) and of course, the convention game will have a much broader array of unit types floating around. Missile weapons may need to be toned down a notch, and I'm thinking leaders may have an expanded role--at the moment, they just let you rally a unit back above half strength, but it would be nice to give them some sort of combat capability as well. On to Unnamed Rules 2.0!
Posted by Norman Dean at 5:22 PM