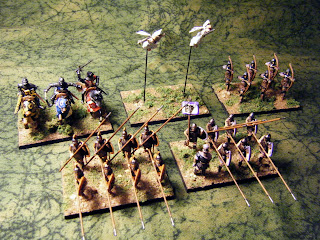 Somehow I have kept to my one stand per day resolution this week, despite distractions in the forms of new novels by Neal Stephenson, S. M. Stirling, and Vernor Vinge (of which I have read two out of the three) and another trip to Washington. 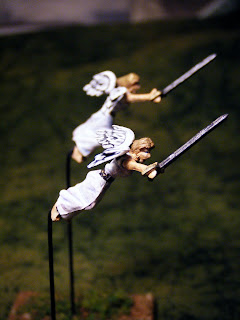 First up, we have these angels, which I mentioned at the end of my last post, and have since painted. 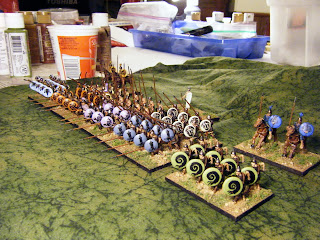 Next up were the last two stands of Antediluvian spears, seen here in the center of the line--orange with an ammonite, and purple with an Anomalocaris for the general's stand. This finally brings me up to the full 24 points of troops required for a Hordes army:

Now I just need to put together a stronghold, and they can face off against the Dinotopians for the first time... 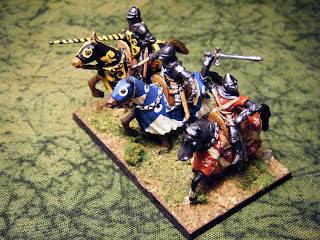 Next I did a stand of medieval archers, but to be honest, they weren't very exciting--also, that was Wednesday, and I was pretty busy reading Stephenson's Reamde. These guys I did up yesterday, when I was a little less preoccupied. They are French knights of the Hundred Years' War, by Accurate. The knight on the left is blazoned with the logo of my glorious alma mater... 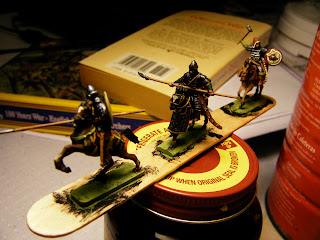 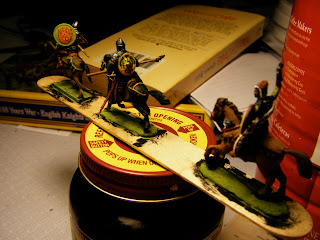 And here is today's stand, not quite finished yet--more knights, this time from the mysterious eastern Palindromate of Dargograd. Two of them are Orion Khazars; the third is a Zvezda Russian knight, who would be a little anachronistic if I were planning to deploy these as historical troops...