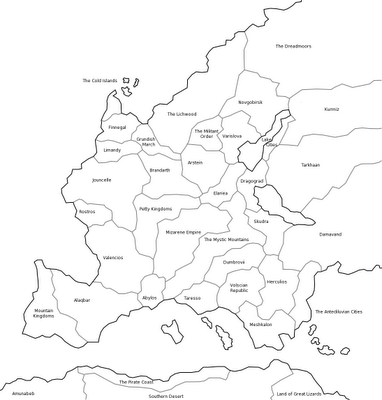 This is the world my brother William and I have been working on as a background for our 20mm Hordes of the Things project. I've been reading the original Conan stories of Robert E. Howard lately, so this world bears a less-than-coincidental resemblance to his Hyborian Age. (Dad claims we should call this one "Myboria.")

It's also a handy guide to most of our existing 20mm plastic projects--past, present, and planned--as most of them have fantasy counterparts. There is a general divide between the "classical" and the "medieval," marked by the Mystic Mountains.

In the East, Dad's Punic War figures double as Meshkalon (Carthage), Taresso (various Carthaginian allies), Dumbrovii (Gauls), and the Volscian Republic. (Rome, of course.) Herculios and Damavand are reserved for his theoretical Greco-Persian Wars troops. The Antediluvian Cities are home to my newest army, while their opponents the Dinotopians live on the mysterious southern continent. The southern desert is full of isolated oases where lost cities inhabited by the last decadent remnants of vast prehistoric empires and sinister priest worshipping dark gods. (Like I said, I've been reading a lot of Robert E. Howard lately.) These can incorporate my Bronze Age troops; Dad's Egyptians have a home of their own in Amunabeb.

The West is a little more speculative. William wants to get some medieval Spanish and Moors for Valencios and Alqabar, and we've started painting up some fairly generic medieval fellows for the fairly generic medieval states of Jouncelle, Brandarth, and their neighbors. Until then, Dad's old Airfix guys will have to fill in. The Lichwood is home to my brother's undead army and a few of their barbaric allies. We have quite a few medieval Russians sitting around unpainted for Varislova and Novgobirsk. Kurmiz and Tarkhaan are my Mongols, who I am thinking about upgrading. (The originals were done seven or eight years ago, and are no longer up to my current painting standard. The Dreadmoors are full of orcs, goblins, and miscellaneous unsavory types. Elariëa is the home of the engimatic Elves, who Dad may paint someday.

We managed to get to the store today, so I have some more wire--that means more Antediluvians in the next few days. (I also found a set of machine guns for some more Mbotese technicals, so it was quite a successful trip...)