The good, the bad, and the clever 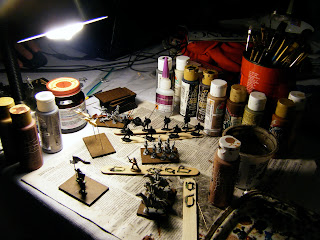 I'm still on track to complete a stand of troops every day this month, but the last couple of days have been pretty busy, so the "stands" have been a couple of individual figures. Here's yesterday's stand, a rather distinguished-looking old fellow who might be either a Magician or a Cleric for my Antediluvians--one of the Nexus Ancient Greeks: 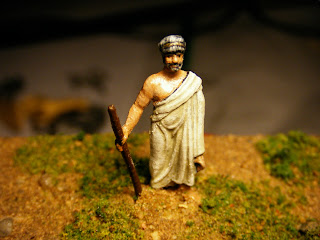 And here's today's: Villem Ganger, der Geierritter--mercenary knight, accompanied by his shieldbearer. These guys are Strelets, from their Army of Joan d' Arc set. I ran across this guy wearing a sallet and what looked sort of like a cloak made of feathers, and thought that there must be something interesting I could do with that. His companion is from the same set--he was originally carrying a polearm and had a different head, but I swapped the former for a banner and the latter for another sallet. (I'm not sure why, but sallets just look more menacing and sinister to me.) 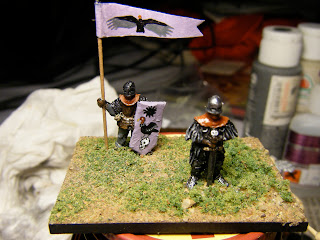 I also finished up a couple more stands of Antediluvian pikes earlier in the week--only two more to go! (These ones are belemnoids--blue-gray--and agnostid trilobites--pale yellow.) 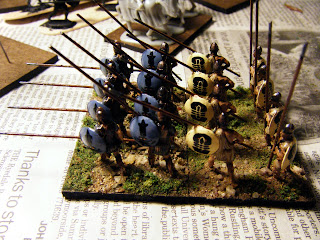 As for the next couple of days, that's where the "clever" comes in. My brother was poking through my boxes of HaT Gallic Chariots and noted that one figure could pass for an angel or something, if someone gave her wings. "I can do that," I said, thinking of the random pair of angel wings that came with the Orion Polish Winged Hussars... 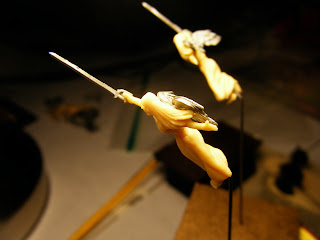 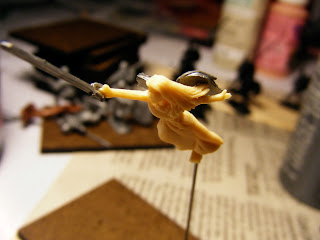 I also gave them swords, of course. One more stand of Flyers...