It has been a productive few days on the painting front. 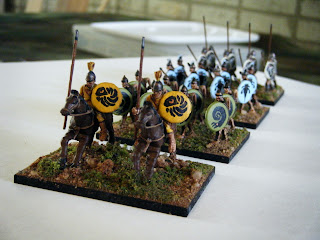 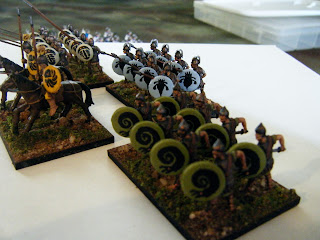 I basically scoured the house for any sort of ancient troops with large circular shields, and these were what I came up with. All of it is salvage from my dad's Punic War project--these guys started life as HaT African Infantry, for the Carthaginian side. The cavalry are actually conversions from one of the figures on the Carthaginian command sprue--originally they were holding a sort of trident-shaped banner, but I replaced those with wire lances. Unfortunately, this is where my logistical problems come in: I have a couple more units worth of the Macedonian phalangites, and another pair of cavalry, but they all require wire spears--and I'm out of wire. So I'll have to find something else to paint until we get to a hobby shop or craft store or something.

I did also paint up this fellow, another Caesar Adventurer--accompanied by his faithful hound, rescued from the Revell Conquistador set. For Hordes purposes he'll be classed as a Sneaker. I don't have much experience with using Sneakers, so that could be interesting. 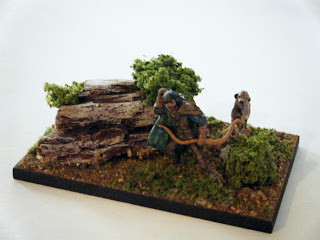 There are getting to be rather a lot of these Hordes troops; it might be a good idea to start thinking about the overall organization of this project. I think I'd like to have several armies (four seems like a good number) maybe including some historical overlap, plus a bunch of smaller contingents and individuals who can be can be added for flavor. (Or put together as another faction?)

So far, the dedicated fantasy troops (so not counting my Hittites and such) are as follows:

"Antediluvians"
2x Spears
1x Blades
1x Riders
--There are several unpainted units for these guys: at least two more Spears and another unit of Riders. I'm thinking I'll pick up another box of the Macedonians at my next opportunity. (Maybe Fall In!?) Aside from the paint job, the Antediluvians are pretty mundane so far. I'd like a couple of model trilobites or something to fit with the "extinct invertebrate" decorating scheme, but the ones I've seen are a little too bulky or expensive.

"Miscellaneous"
2x Behemoths (scorpion men; currently used by my Bronze Age fantasy army)
1x Flyer (winged demon)
1x Magician (good)
1x Magician (bad)
1x Hero (pair of guys with cloaks and longswords)
1x Sneaker (ranger and dog)
--I think the scorpion-men, demon, and evil Magician may end up being the core of some sort of "Chaos" army; I've got a couple of boxes of Caesar Orcs who could be the grunt troops. And maybe the Heros and such could back up a generic medieval sort of army, with lots of Knights and whatnot.

Anyway, for now I'm waiting on some more wire. Maybe in the meantime I can get a few more of the miscellaneous guys painted up, or get back to work on one of my other projects. (Mbotu? Chariots? The Not Quite Seven Years' War? We'll see...)